Before San Francisco rose as one of the most successful, thriving, and popular cities in the United States of America, its early years comprised of various stages. San Francisco’s founding is said to be made up of three very distinct stages. The first stage is known as the Presidio stage and it was when San Francisco was first explored and established by the Spanish to for military purposes. The second stage is the Mission Dolores stage and was also present during the first stage, but needs to be its own entity because it set the stage for San Francisco’s first Spanish\ inhabitants and religious affiliations. The third stage is the Town of Yerba Buena stage. At first San Francisco was not known as what it is today, but it was named Yerba Buena, a small town to some with a couple of settlers. In 1837 Yerba Buena officially changed its name to San Francisco. After the Gold Rush the increased migration and new planning practices changed the way communities were designed.

San Francisco was generally designed to accommodate the outrageous number of people that came to the city during the Gold Rush. The block-like patterns allowed for all the inhabitants to spend their energy and time on their work, as opposed to transportation to and from work. This influx of people created a need for people from the East Coast of the United States to travel and visit the West Coast, like San Francisco. Because of this, the railroad connecting the east and west was created. Unfortunately, this did not solve intra-city transportation needs, so there had to be some sort of transportation method in San Francisco itself. The cable car was invented and become a staple in San Francisco culture. It transported people up and down the hilly city and created a vibrant atmosphere of travel within the city. With more and more people traveling over to San Francisco, it was decided there needed to be some sort of design plan. This is when the famous Daniel Burnham suggested the “City Beautiful” plan of grand boulevards and Haussmann style avenues. This idea would also incorporate a giant town hall and a whole section of the city would be left to become a nature park, in which nearly no buildings would be built. Unfortunately, the city turned down these ideas and simply chose to build based off of the current layout the city had. After the 1906 earthquake and fire, the panic set in and the mindset of building as quick as possible was used. This led directly to the different organizational parts of San Francisco that we have to this very day.

The era of prosperity and stable city expansion in the 1920’s gave way to quickly accelerating population growth. The war worker population boom of the 1940’s led to an increase of blight, overpopulation, and a lack of necessary infrastructure. This sudden instability drove the city of San Francisco to develop a more comprehensive plan and cohesive planning organization. The city also responded with a redevelopment program that focused on several neighborhoods such as the Fillmore and Mission. Some social groups such as the Mission Coalition Organization banded local people together to resist the federal “improvements” to their community.

Downtown San Francisco is extremely dense; it is a very well planned city with very minimal area available for expansion. The planning commission split downtown into four separate zones with different purposes. This was done to de-condense the city. The four zones of downtown are:

These four separate districts along with being strategically zoned around downtown help to decongest the city. This was all planned to work and feed off of each other to help and promote San Francisco as a visitor and pedestrian friendly city.

San Francisco is a unique city filled with different geographical elements, bustling with people of various backgrounds and different cultures. In order to maintain such a city in a way that is comfortable and appealing to its residents while adapting to the changing world, the city created a General Plan to serve as a basis for making planning decisions for the city. The General Plan consists of nine elements that each focuses on different aspects of a city, and also includes sections that focus on different neighborhoods of the city and its specific land use plan and housing states. The overall goal of the plan creates a city that balances out its people's needs and environmental and economic aspects to create a livable city while retaining its distinct San Francisco feel. 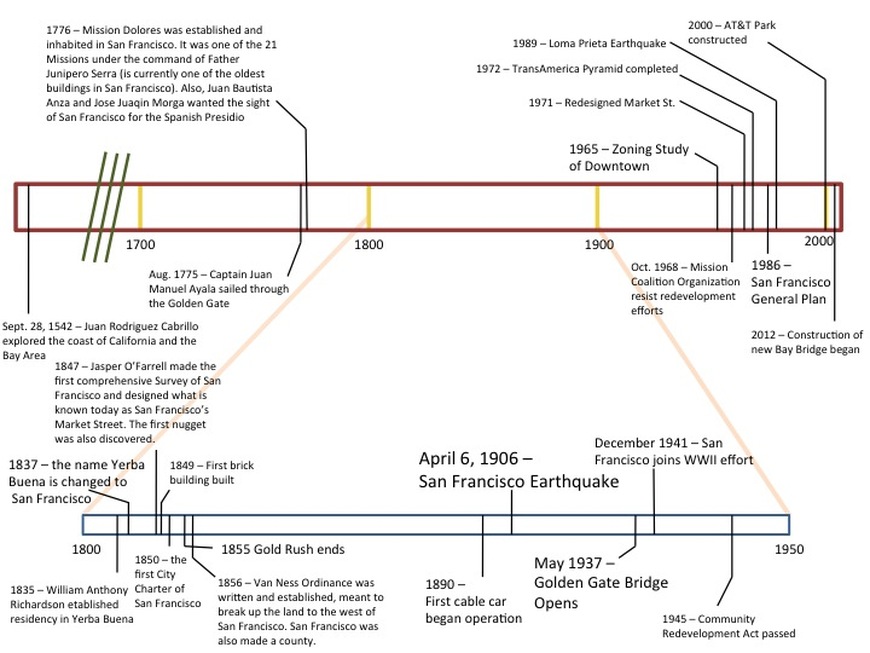