With the California Gold Rush beginning in 1848, many people traveled over to California in seek of work, a place to live, and an all-around great life. It is estimated that nearly 90,000 people migrated to California in 1849. By 1855, the number of people in California had risen to 300,000, more than tripling the population. This increase in population created a need for some sort of set infrastructure, and the city planning took place. By the peak of the Gold Rush, February 1852, a map of basically any structural building was created to be able to create a plan for the rest of the unused area. From this time on, the plan of San Francisco was to build the infrastructure in a symmetrical, block pattern, like this: 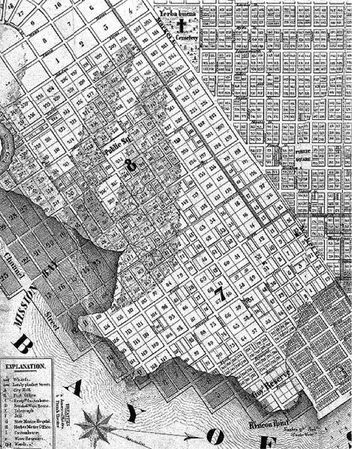 A significant benefit in the building of homes, businesses, and other buildings in such a regular, square pattern was that at the time, nobody had time to stay indoors. Every wasted second was time in which one could be mining for gold and becoming rich. Everyone ate in hotels, restaurants, or boarding houses to save time. The fact that these were all located so closely to the areas of mining meant that the miners could waste even less time in between mining sessions and they could eat, relax, or sleep nearby.

This time also brought about the building of several different types of houses. Typically, before this time, houses were made solely from lumber and wood and would lack structural support to withstand most acts of nature. This caused the city planners and highly ranked government officials to strive for better building tactics. One of these tactics was creating brick buildings. San Francisco’s first brick building was built in September of 1849. This building set the standard for future buildings because it built a strong enough structure to withstand battering from rain, wind, and many other acts of nature. Eventually, this building was leased to the United States Government in 1850 for a rent price of $3000/month. Unfortunately, this house was apparently not the best designed to stop fires as it was burnt down and destroyed by the first of 1857.

Around the time the California Gold Rush ended, San Francisco’s population had grown large enough that the West Coast had grown to house a large portion of the United States. It was imperative that the United States would somehow connect the two coasts and really secure the “one country” feel at the time.

Theodore Judah, a civil engineer at the time, presented the plan of creating a grand Pacific Railroad. This project called for a railroad to travel through the United States, from west coast to east coast. This plan was so great in size that its importance trumped every other plan of equal value in the United States in the number of people planning to utilize it.

It was explained by Judah that this two thousand mile long railroad would cost roughly 150 million dollars. It was important because nearly all of the population of the United States would utilize it in travel.

Utilizing Forms of Transportation in the Late 1800s

The city of San Francisco was not like the cities of the East Coast in the fact that it had hills, bays, the ocean, and many other geographically limiting factors. This all shaped the way transportation was implemented. Horse-drawn cars were introduced shortly after the beginning of the gold rush to help in transportation. The worked well due to the fact that many people had to get around to their jobs as miners, but did not want to expend much energy trying to get to work. Following the horse-drawn cars, one of the most symbolic transportation methods of San Francisco was introduced: the cable car.

It was invented for the purpose of climbing up these steep hills San Francisco had. The first cable car began its operation in 1890, and people still use cable cars to this very day. A big problem brought upon the inhabitants of the city was then the crossing from one side of the bay to the other (San Francisco to Oakland). Because of this, San Francisco created a system of ferries to allow for transportation from one end to the other.

At 5:12AM on April 18th, 1906, San Francisco witnessed one of the most intense earthquakes mankind has seen. The magnitude 7.8 earthquake tore apart the city with shaking lasting up to 60 seconds. This earthquake caused severe damage to homes, business buildings, roads, and every other infrastructural piece of San Francisco. Following the earthquake, several fires began to burn out of control. These fires not only trapped residents, but also demolished nearly 80% of the city.

Almost immediately after the end of the fires, the city of San Francisco began city planning and rebuilding. Before the fire, Daniel Burnham, one of the most famous and professional urban planners, proposed a plan to build Haussmann style avenues and streets, a giant town hall with several classical buildings surrounding it, the biggest park in the world, and several other ideas. But, this plan was ultimately dismissed by several critics, saying it was unrealistic based off of the supply and demand.

Daniel Burnham was an American urban designer in the mid-19th century. His work and planning style modeled that of the Greek & Roman classical styles, with laid out cities and roads leading to the city’s most prominent buildings. Burnham’s ideas were drastically different than what actually occurred in San Francisco. Instead of rows and rows of houses and buildings that are currently seen from the twin peaks of San Francisco, one would see a green land, filled with trees, flowers, meadows, and all other creations of nature. Sitting next to the beauty of nature would be a small, gentle flowing river.

When Burnham was transported to San Francisco to study his plans, he was stationed at the top of one of the twin peaks. He first looked east and Burnham imagined the city to be organized by functional districts. The homes would be grouped together, the entertainment buildings would be combined, all work atmospheres would be combined, etc. Burnham looked west and began to contemplate a state of natural beauty that could be revamped. As described earlier, the city’s south western area would become a vast parkland, which would be a complete contrast from the city’s industrial, residential, and commercial setting on the eastern portion of the city. 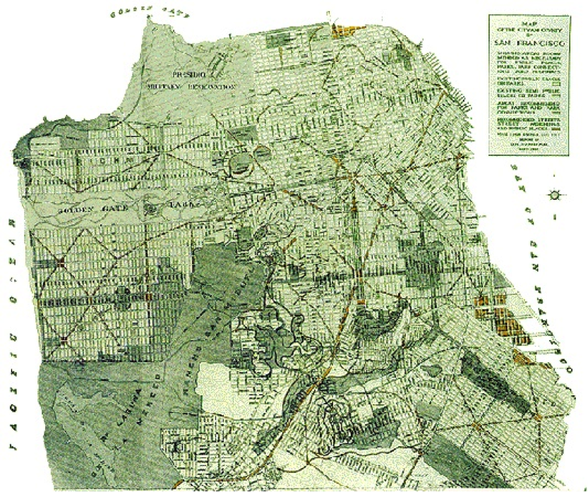 The whole 4,764 area extending from the Twin Peaks to Lake Merced would be the great park located in San Francisco. This plan called for much more than just a simple layout. It also included broad and big avenues and boulevards. These streets would lead directly from one main part of the city to the next. Whether it lead to a park, the city hall, or a museum, these streets all bonded together the city, creating a funnel-like effect, pointing the people of the city to the important portions of it. Unfortunately, Burnham’s ideas were shut down.

Instead of rebuilding based off of Burnham’s ideas, several scientific minds came together and decided rebuilding San Francisco as quick as possible would be essential. This group eventually formed the Structural Association of San Francisco, which later became the Structural Engineers Association of California (SEAOC). Based off of the research of the SEAOC, it was concluded that wooden buildings were only able to withstand a similar magnitude (of ~7.8) if the wooden buildings were reinforced with a solid foundation and braces. The wooden buildings that were not reinforced with braces were the first to be destroyed. From that point on, all wooden houses were then reinforced with these braces only to make them much stronger. This implementation would help encourage many people to continue moving to San Francisco. People would have to fear death after much of the seismic activity had they realized that the reinforcement was key. Though the braces helped, the structures that received the least damage after the 1906 earthquake were the steel framed buildings and houses. These structures showed little to no structural damage after the earthquake, which showed that they were superior to all other building types. These buildings were then implemented into all future building policies.

Other than the basic building structures gaining some sort of reinforcement, not many building code standards were changed. Many would question why this was, but it makes perfect sense when looking back at the city. Since about 80% of the city was destroyed, there was a political and commercial pressure to rebuild as fast as possible, as to not decrease the city growth rate. Within one week of the earthquake and fire, 300 plumbers were at work to fix the water pipes for the city. Without this sense of urgency, the city would not have kept growing as significantly as it did.

Specific ideas were put in place to help shape the rebuilding of the city:


The use of in-state and local lumber and other building materials allowed for the stimulation of local jobs. More jobs allow for the population to increase and kept people from thinking about the earthquake and fire that just happened. These jobs showed that the city wanted to keep moving in the right direction, building up the infrastructure and create a prosperous city, as it showed it could have before.