The period of 1920-1930 was one of great prosperity and growth for San Francisco. The marine and water front shipping business drove the local economy and skyline started to change as tall buildings popped up over the low skyline. Populations in and around the city began to grow quickly. Between 1920 and 1930, the population of San Mateo county more than doubled. 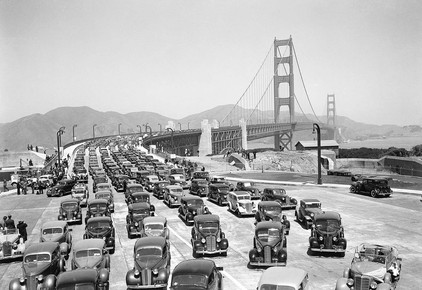 Opening of the Golden Gate Bridge (SF Examiner)
Besides the expanding economy, the population growth can also be attributed to new transportation hubs in the region including new port development and the construction of San Fransisco International Airport in 1927.

The Bay Bridge opened in 1936, followed shortly after by the grandiose opening of the Golden Gate bridge in 1937. These bridges caused a huge shift in transportation throughout San Francisco and the bay. More people moved to and traveled through SF[2]. New economies became available in surrounding areas like Oakland. These two bridges broke the isolation the water surrounding the city had imposed on automobile traffic. The new ease of transportation by car caused huge traffic congestion in the city. Between 1914-1937, the number of registered vehicles in the city of San Francisco rose from 12,000 to 160,000. The influx of cars to SF also changed parking situations, especially around the super busy retail area of Union Square. The Union Square Garage commission was formed and eventually built the huge underground structure in 1941.

The construction of the bridges also changed public transportation. There was a major shift in trans-bay transportation from ferry to bridge travel. The iconic ferryboats of the SF Bay were replaced by new rapid, public transit from the center of San Francisco to surrounding cities and counties. This again helped open up new suburbs and shopping areas to the residents of San Francisco. [3]

Development of public transportation in the city continued development as well. During the early 1930’s, early rail lines began to be established which provided the framework for the current Muni Metro subway. New lines were expanded throughout the city by digging tunnels in the hilly San Francisco terrain. The first Muni trolleybus line was introduced in 1941. This new public transit helped tie the individual neighborhoods of San Francisco together. 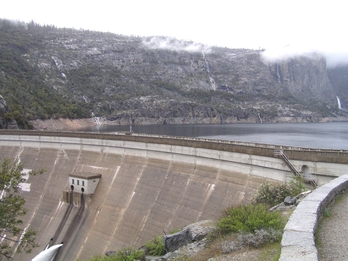 The Hetch Hetchy Reservoir - The Sierra Club
The growth wasn’t totally stable. The huge increase in population led to the realization that the public infrastructure of San Francisco wasn’t being developed as quickly as the population expanded. Local agencies began to undertake infrastructure improvement. The purchase of the Spring Valley Water Company and construction of the Hetch Hetchy and Pardee reservoirs helped assuage instabilities in water supply. A lot of these projects started in the 1920’s and 1930’s were separate and distinct and weren’t as effective as cooperative efforts that were made between regional districts in the early 1910’s [4] New projects, expansions, and public utility acquisitions by PG&E made the supply of power to an expanding SF stable during this period. 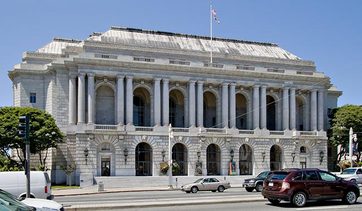 War Memorial Opera House - intours.com
The Depression hit around 1930 and affected SF planning in several ways. Many of the projects started in the prosperous 20’s were actually completed, including establishment of the War Memorial Opera House in 1932, Coit Tower on telegraph hill built in 1933, and an increase in public recreation space including the establishment of new state parks. Development continued, but has certainly slowed. The sudden lack of funds caused San Fransisco developers and planners to reconsider how to allocate recources and funds [4].

The Works Progress Administration established by FDR in 1935 drove planning and infrastructure development. Regional planning organizations petitioned the WPA to get man power to begin fieldwork and surveying for projects they may not have been able to get started before. The SF Metropolitan Area Planning Commission was officially formed (but never achieved recognized by the WPA) in September 1935. The actual cities of the region were disregarded from the committee in favor of the counties, which made internal politics ugly and the agency quickly fell apart. Though some efforts at establishing a regional planning commission or regional master plan failed miserably, it was a good learning experience for the region, which became valuable once the war effort hit the region [4].

As the country entered into WWII in 1941, almost every development activity was put on halt. The military defense industry took off at a wild pace. The docks and ports of San Francisco suddenly became hubs of industry which attracted huge numbers of workers. This giant and incredibly fast influx of population tested the planning and development capabilities of the city. 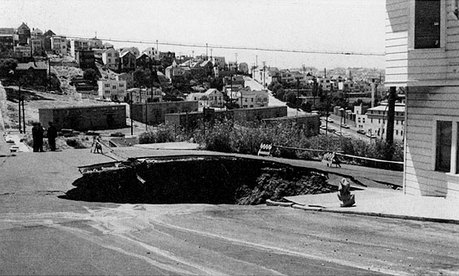 Degrading public infastructure at the Potrero Hills Temp Housing Project - FoundSF
In 1941-1943, population boomed in San Fransisco as workers moved to the city to work in the war industry. Local resources quickly became overwhelmed and the city was saturated with new residents. It was extremely difficult to provide housing because all efforts were being poured into the war. Richmond was an example of a city which was not at all capable of handling this [4]. The city ended up being hit very hard by this boom, with public infrascture crumbling and homelessness shooting up.

The neighborhoods of San Francisco changed dramatically during this time period. Rincon Hill was first established as a neighborhood for those with money. Large and luxurious houses were constructed. In the early 1920’s and 1930’s the demographic began to change dramatically as seaman and shipbuilders moved into the neighborhood. Rincon Hill began seeing less mansions and more bars and barbershops. During the war, the area became further crowded as more sailors and ship builders took residence here. The neighborhood soon became an example of a blighted area; overcrowded and dirty.

Some countites were opposed. “I think Contra Costa County feels, as do all bay counties, that one cohesive system of planning for the entire Bay Area would be a splendid thing. We are a little bit surprised, however, to be perfectly frank with you, to find that you have these powers” Some cities and counties took to the idea of establishing a state planning district and developing a regional plan, while others wanted to keep their own identity and make policies for themselves.

After Pearl Harbor, local groups were kicked into action. The population boom of war workers needed to be addressed immediately. They reorganized into a voluntary Regional Development Council to address war and post war planning issues. Inter-organizational bickering was put on the burner while the pressing issues of the war were addressed.

The San Francisco City Planning Commission stated the need for a master plan. The first real step towards this was the Present and Future Use of the Land report issued in 1944 which focuses on population density, housing, and future development. Industry and housing began expanding outside of the city into more outlying regions [4]. Increasing amount of highways led to an increasing amount of tract housing being built in the outlying San Francisco regions, though not many in the actual city of SF[1]. Zoning soon became an important issue, with people questioning the pros and cons of suburban density and planning.  Shopping malls and office buildings also began springing up in outlying regions

The blight and overpopulation from the war still linger. The streets around the downtown area and business district are congested. The public transit is still not up to snuff and infrastructure in many regions is failing. The redevelopment movement sought to fix these problems. 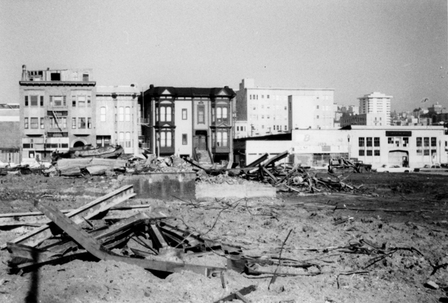 Housing being removed in the Fillmore -urbanhabitats.com
The Fillmore district is part of the Western Addition. It was one of San Francisco biggest re-development efforts made possible by the California Redevelopment Act of 1945 which was passed to fight “urban blight” defined by “economics, dilapidation of housing and social conditions - including the size of the nonwhite population” [2]

When the project started in 1948, 60 percent of the Fillmore’s population was African American. The redevelopment was fast and harsh. A huge number of buildings were demolished. Local home owners were forced to give up their homes and thriving businesses. 883 businesses were shut down and 4,729 households were displaced [2]. Developers promised to help them move back into the neighborhood after development was finished, but these promises were often not followed through on. Even the neighborhood name changed. Developers began calling parts of the neighborhood “Baja Pacific Heights” to make it more inviting to potential residents.


The San Francisco Redevelopment Agency has been working on the project for over 40 years now and has spent over 50 million dollars working to improve the area. The Agency finally wrapped up efforts in the Western Addition in 2008. Many residents were glad to see them leave while others seem to wish more efforts were made to “repair the damage” [2]. 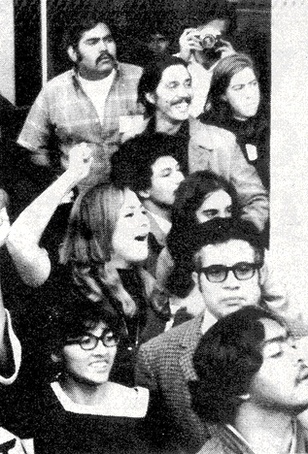 The MCO protests Model City redevelopment - FoundSF
The mission district was also targeted by the San Francisco Redevelopment Agency. It was a primarily a lower-class, Latino district and home to many recent immigrants.

The agency actually faced organized opposition this time from the Mission Coalition Organization who represented many of the local community and cultural organizations. They were relatively successful in this opposition, which inspired community groups to strengthen and apply for their own federal redevelopment funds.
Founded October 4th, 1968, the MCO had 800 members from over diverse 60 organizations [1]. The organization experienced serious internal conflict over whether to give Model City funds to existing institutions or independent non profit organizations. The MCO fell apart by 1973 over internal conflict . They received over $15 million in federal funds from 1971-1980.